Li Yao Fen, a Hani girl, could only walk in a squat position due to deformity in her legs. Through generous sponsorships from a charitable person, Yao Fen came to Shanghai on June 12 to undergo surgery to improve her walking. Yesterday little Yao Fen underwent joint surgery in the Pediatric Orthopedic Department of Xinhua Hospital. Experts said that the operation should be expected to reach its goals. If the post-recovery is great along with rehabilitation, the doctors believe that "the child would be able to walk properly".

Four experts team up for this surgery

After little Yao-Fen was admitted into the hospital, the doctor conducted a comprehensive examination for her and found that her legs were deformed. Moreover, they understood that the procedure would be complicated and long. Shen Pin Quan, the Party secretary of the pediatric orthopedic branch, said that doctors and nurses were very sympathetic towards little Yao-Fen and hoped to do their best to improve her walking ability. She had a mediocre nutritious status; but, the doctors believed her conditions would change after the surgery. 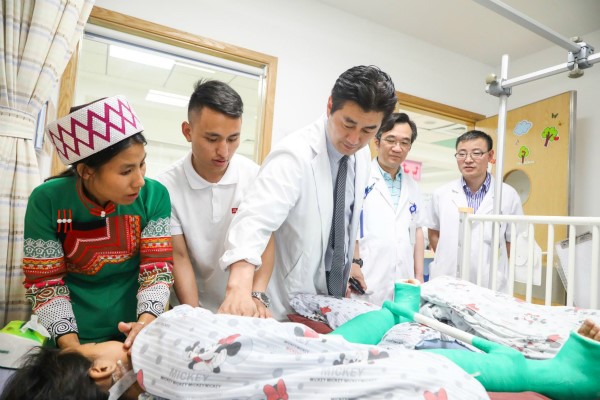 The surgery was successful when little Yao-Fen came out of the operating room with her legs straightened by support. The photo above pictured Yao-Fen’s emotional mom who shed tears when she saw her daughter's outcome. The next 48 hours were critical. Last night, every half to one hour, nurses when to check up on Yao-Fen to see if the vascular circulation of the limbs were unobstructed. The plaster on Yao-Fen's legs can only be removed after two months. During her recovery period, she will be staying at Xinhua Hospital.

When little Xiao-Fen arrived at the hospital, she was uncomfortable with the new environment. To do so, she was not willing to communicate with the doctors nor nurses. But, in the last ten days of meticulous care from the hospital staff, Xiao-Fen no longer felt uncomfortable. Doctors and nurses saw smiles from Xiao-Fen and began cooperating with the operation yesterday. 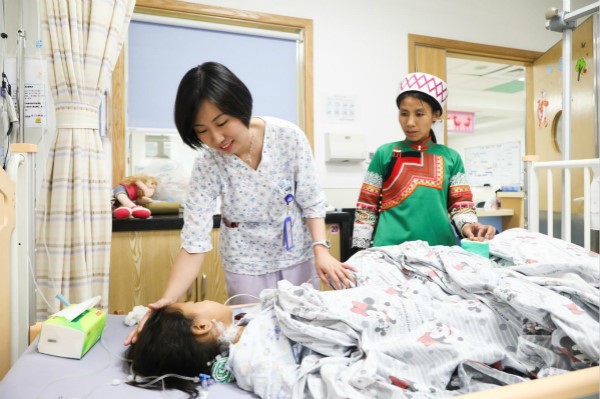 During her stay at Xinhua Hospital, Zhang Yi Zhong; a volunteer who took the child to Shanghai; has helped raise money for Xiao-Fen's hospital expenses. To do so, Zhang has contacted the Shanghai Charity Foundation and opened a funding account called "Flower-blooming-squatting hani girl". Through this funding account, Zhang has helped Xiao-Fen raise over 20 000 yuan. In addition, Zhang and other volunteers went to visit Xiao-Fen with clothes and daily necessities for Xiao-Fen and her mother. He was also responsible for their deposit. 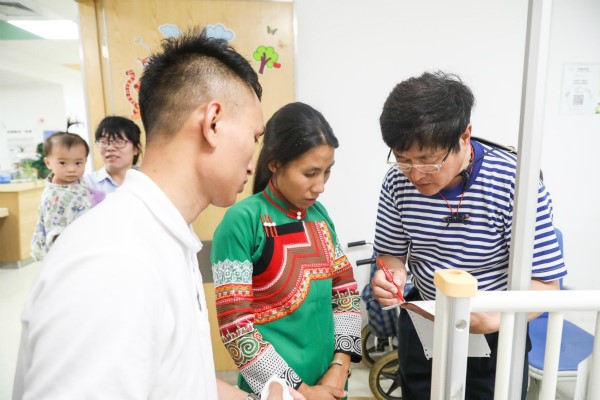 A young volunteer hani man named Li Pu Zhe helped Xiao-Fen and her mother with translation. Pu Zhe told reporters that he was also from Dashan, Yunnan. Currently, Pu Zhe is working in Hongshan Store in Pudong. He discovered Xiao-Fen through a Wechat circle that published those in need. He was moved by Xiao-Fen's article and he decided to provide help.

The hospital hoped that Pu Zhe could stay with them overnight so that they could respond to emergencies at any time. Pu Zhe immediately said yes. He even paid for the surgical plaster on his own. He said, "I'm really touched by the good people who had helped my little fellow in shanghai." Few people in Shanghai speak Hani language, and even fewer speak Xiao Yaofen's native dialect. Pu Zhe was honored to take this job as Xiao-Fen's translater